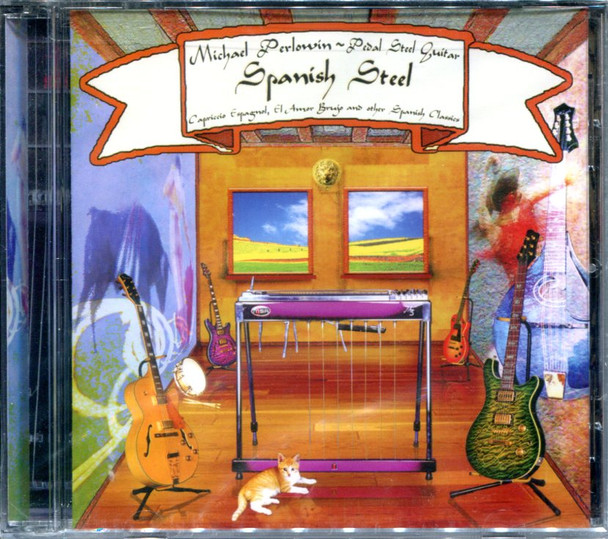 The CD contains 5 pieces. It starts off with Manuel de Falla's "El Amor Brujo" ballet suite. this 22 minute suite consists of 11 short pieces, and while collectively they form one piece of music, some of them, the part knows as the Ritual Fire Dance in particular, are often played by themselves without the rest of the suite. (Note I called all the segments by their Spanish names.)

The 2nd piece is named "Asturias" but is also sometimes called "Leyenda." I don't know why. This piece by Isaac Albéniz has become a staple of the classical guitar repetoire. Rock and roll fans will recognize it as the opening theme from the song "Spanish Caravan" by the Doors.

Because the guitar is so important in Spanish music, the next piece gives the guitar and steel equal prominence. This is the 3rd movement of Joaquin Rodrtigo's "Conceirto (yes that is the correct spelling) Andeluz for four guitars. I played the guitar parts on guitars, as written, and used the steel to cover the brass and woodwind parts. Every time the guitars play a theme, the steels repeat it.

Rodrigo's hauntingly beautiful Conceirto de Aranjuez is so popular, that it has overshadowed his other compositions. This is one of his least known works. It is also in my opinion, one of his best.

The next piece is from Peru rather than Spain, but I learned it from a Sabicas record, so I guess I get a pass on that. it's called "Fantasia Inca" and was written by a man named J.M. Oyanguren. For some reason, all of Oyanguren's music seems to have disappeared. Normally I use a combination of sheet music and my imagination to come up with my arrangements, This time I was unable to find not just the music to this piece, but of any of Oyanguren's works. Moreover, I had some friends search the nations college and university music libraries nationwide, and nobody found even a single example of his music. This is the first time I ever recorded a pice of music with no written guide whatsoever. BTW this track is just steel and percussion. There are multiple steel tracks, but no guitar or bass.

Finally, the 15 minute "Capriccio Espagnol" by Nikolai Rimsky-Korsakov. This was a mammoth production requiring 109 tracks at one point.

I think this is the happiest, most joyful piece of music I have ever heard. It just makes me smile every time I hear it.

Everybody who has heard this CD says it's the best thing I've ever done. I'm too close to it to know whether or not that's true. I can say that it is the biggest production I've ever attempted, and that I'm pleased with the results.

Making this album took a tremendous amount of work, I hope it was worth the effort.

MSRP:
Now: $5.00
Was:
"Peace On Earth" by Mike Daly   Mike Daly's Christmas album is only 28 minutes long,, but it includes some of the best recorded steel guitar I've ever heard. Each of these familiar tunes is...

MSRP:
Now: $2.00
Was:
"A Retrospective" by Michael Perlowin. Michael Perlowin has produced 3 albums of classical music on pedal steel guitar.  This CD contains Mike's own favorites from those recordings, plus a live...

MSRP:
Now: $6.50
Was:
"Peace On Earth" version 2 by Mike Daly Mike Daly Christmas album is only 35 minutes long,, but it includes some of the best recorded steel guitar I've ever heard. Each of these familiar tunes is...

MSRP:
Now: $2.00
Was:
"A Retrospective" by Michael Perlowin. Michael Perlowin has produced 3 albums of classical music on pedal steel guitar.  This CD contains Mike's own favorites from those recordings, plus a live...

MSRP:
Now: $5.00
Was:
"introducing the secret combination" The Secret Combination is a world class country-rock band from The Netherlands that includes Forum member Johan Jansen. Their music is intelligent,...

MSRP:
Now: $6.50
Was:
"St. Louis Rain " Elizabeth's 2008 release features more of her great pedal steel guitar instrumentals, backed by some of the finest musicians in western Canada. Also included is her touching...

MSRP:
Now: $6.50
Was:
"Slydexic" by Rick Alexander Rick Alexander played all of the instruments and wrote most of the songs on this soulful 2008 CD. His own songs show a deep understanding of folk, country and blues...

Sterling Kock CD How I Spent My Summer Vacation

MSRP:
Now: $6.50
Was:
"How I Spent My Summer Vacation" (The Sacred Steel Sessions, Vol. 1) Sterling Koch (pronounced Cook) is the lead guitarist and lead vocalist with the Victory In Heaven Blues Band. Sterling is also...

Johan Jansen CD Head Back in the Clouds

MSRP:
Now: $5.00
Was:
With this project, Johan Jansen leaves little doubt that he is one of Europe's foremost steel players. Framed by spectacular arrangements of contemporary instrumentals, JJ exhibits a spectacular...